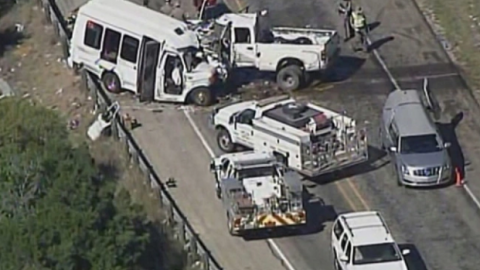 Remember when a driver in Texas admitted that his texting caused an accident that killed 13 people? That wasn't illegal.

Nope, in the state of Texas, there is currently nothing wrong with driving while not looking at the road. While 46 states have laws prohibiting the practice, Texas does not. Legislators in the Lone Star State passed a bill in 2011 that would have outlawed texting behind the wheel, but Gov. Greg Abbott vetoed it.

Since then, we know of at least 13 people who have been killed by perfectly legal texing drivers. After the March crash that killed 13 members of the First Baptist Church of New Braunfels, Gov. Abbott and his wife Cecilia released a statement that said, in part,

“We are saddened by the loss of life and our hearts go out to all those affected. We thank the first responders working on the scene in the wake of this unimaginable tragedy, and ask that all Texans join us in offering their thoughts and prayers.”

If you live in Texas and have an opinion on this bill, Gov. Abbott's contact information can be found here.

I'd like to share this great news story about distracted driving from our local TV station here in North Charleston, SC - Live 5 News. Even though South Carolina’s texting and driving law was passed in June 2014, it's still far from ideal. Reporter Carter Coyle collected great data and put an amazing story together. It may serve as good reference to this current legal scenario in Texas. The story can be found at http://www.live5news.com/story/35356540/texting-tickets-is-sc-law-strict-enough. We also have some useful information about distracted driving on our website, and in case anybody wants to check it out for additional research, it can be found here.

Permalink Submitted by ew on Wed, 08/16/2017 - 12:06pm
Why is it legal in Texas? Have they talked to the mother's ,brother ,fathers friends and orphan children left behind ? Of the victims of texting and driving? Maybe sombody is making money by keeping it legal What can we do as a community to help this be iligal and a crime

Got to call BS.  I live in Texas and ANY DISTRACTED DRIVING IS ILLIEGAL.  Does not matter if you are looking at your cell phone or changing the radio, you can get as little as a ticket to jail (especially if you kill somebody)

Thanks for your comment Art. After this article was written, the Texas governor signed a new law banning texting while driving, which goes into effect September 1. Read more here...