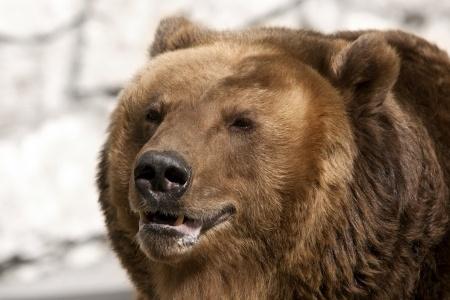 A drunk bear in Colorado broke into a Subaru last week and wasn't content with simply trashing the car like a normal bear. No, this bear also crashed the car into a mailbox before using it as a bathroom.

Ron Cornelisu, neighbor of the unfortunate car owner, told the Durango Herald that he heard a commotion at 5 a.m. one day.

"Usually, I don’t get up at 5 o’clock unless there is a bear driving a car down the street."

Oh, Ron, you card. He looked outside and saw a vehicle crashed in his yard. Not knowing if anyone was inside, he called 911, and authorities found convincing evidence (i.e., poop) that indicated a drunk bear was at fault.

Not only did the bear defecate in the car, it also pulled the steering wheel off the shaft, tore the radio out of the dash, and smashed the back window.

How do I know the bear was drunk, you might ask? Do I have proof? To this I say, do I need proof? Do you have any proof that the bear wasn't drunk? How else do you explain this kind of behavior? Even frat boys don't do this when they're sober. Bear was drunk, OK?

it's really good to read a story not about someone killing someone, insulting someone, or something else negative.  it's not exactly a positive story for the poor unfortunate car owner.  (really hope the owner's insurance covered this claim),  but for me i needed this gave us a bit of a laugh  about the bear not the poor car or it's owner,  to me this is a positive story.  thanks for sharing.  my heart goes out to the owner of the car.

Drunk bear breaks into car, joyrides, crashes...poops A drunk b

THe most ignorant report that would be on a site for MHP.  I'm embareesared and ashamed this would eve be affilated on this sitr, no wonder every other US state thinks we are hillbillies.

I'm guessing at the way that comment was formatted and written with all the spelling errors that was actually the drunken bears mom trying to deflect the blame and keep him off of the front pages! (He is running for office after all)

Permalink Submitted by Acidium6 on Mon, 09/21/2020 - 9:04pm
Its good that the bear knew to aim its frustrations at the proper vehicle..The fact that he went for the Subaru rather than say an old truck shows that the bear is aware of the hypocritical elitest trend of buying a subaru to show social status.. And the typical Subaru elitest seem to plague our national parks and very often do not understand the proper methods of paying attention to the lean of the land nor carry the forsight to understand pooping in a runoff area can send fecal issues into the waters where bears fish. So props to the bear for keeping things strait even while intoxicated..!

Permalink Submitted by Corey Wilson on Thu, 10/29/2020 - 4:22pm
...aware of the hypocritical elitest trend of buying a subaru to show social status.. And the typical Subaru elitest.... You are very wrong in your off view of "typical" Subaru owners. It'speople like you that are what's wrong with this country. You are an oxygen thief sir and it is unfortunate that you're around to spread your bulls**t.

The fact that someone is offended by this gives me great plesure even tho i didn't find what i was looking for on here and what i was looking for is very grim.  i don't typicly comment on things online but this made me laugh and gives me a bit of hope in hummanity to take something positive out of a negative sistuation. People need humor in there lives even when in distress. God bless this hillbilly state and the Hillbillies in it.

THE FACT IS THAT YOU ALL ARE RESPONDING TO A STORY THAT WAS REPORTED IN  2017 SO THATS FOUR YEARS OLD AND IT MAY OR MAY HAVE NOT BEEN REAL. SHOWS YOU HOW MEDIA/PRESS CAN FOOL YOU OR MAKE YOU THINK ITS A CURRENT ARTICLE OR NEWS STORY THEY RECYLE NEWS ALL THE TIME.,...

This story was absolutely unbearable. It must have been a black day...and what a grizzly crash! (Even if those two sound like polar opposites.) You might even say the owner was having a Kodiak moment!

And Larry for the win!