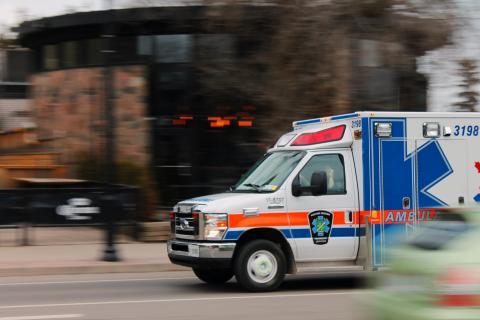 File under: Nope. See also: Why I Can Never Live in the South.

When she felt a sharp pain on her foot after walking into a Spotsylvania County LongHorn Steakhouse, Rachel Myrick assumed she'd been stung by a bee and tried to brush it off. But soon, as she told the The Free Lance-Star, the pain turned excrutiating.

“I had my fingers under my foot and that’s when I felt something moving,” said Myrick, who realized been bitten twice on her toes and once on the side of her foot by a roughly 8-inch-long baby copperhead snake. Somehow the reptile had managed to get inside the restaurant's foyer and apparently didn't like the looks of the real estate agent's sandal-clad feet.

After the snake was killed and medics arrived, Myrick was brought to the hospital for observation. She wound up having antivenin administered after swelling became severe, reaching as far as her hip. She was also given morphine and benadryl for pain, and is expected to recover over the next three months.

Her family's meals were comped by LongHorn Steakhouse, which feels...somehow inadquate, but a nice gesture nonetheless.

Well, maybe if she had been wearing SHOES she wouldn't have been bitten on the toes and side of the foot. Most places have "no shirt/no shoes" signs but they allow flip flops and sandals.  To me, it's the same, especially when they can't wash their feet at some point in the month.  Or have we time traveled back to the barefoot 60s?  Maybe we're too poor to afford shoes now?  When I was in high school, they wouldn't let us wear flip flops, saying they were too dangerous. Now, flip flops seem to be the only "shoe" that people want and even men are wearing them.

My guess is she also had a cell phone glued to her ear and wasn't paying attention to where she was walking, either.

Michael, maybe you should read the article more carefully before you give such an opinion.  The article clearly states she was wearing sandals.

Your opinion really doesn't matter. Sandals and flip flops are shoes!! Just because you have ugly feet doesn't give you the right to pass your personal useless opinion onto the rest of society. I would guess you are a liberal. She was sitting and not walking so she was probably paying attention to her food and family!! Why can't it be people like you that suffer? Karma needs to move faster!!! The sixties? Oh, those who think today is so much better know little!  I pray she heals quickly and can enjoy some fun in the sun in the wonderful south!!!

I can't even begin to respond to this idiots comment about flip-flops. what if she went down to scratch her leg in the snake better on the hand? should she have walked in like the tin man? is this guy an idiot ? Wow!  I can't imagine the pain this poor lady had to endure .  I God  I hope she has a fast recovery and I hope that the restaurant does more than comp a meal .  It's your establishment. you're responsible for what goes on in there .

Times have changed Michael.  There was no indication that she was on the cell phone in the article.  Young snakes do not travel far from their nesting area.  Hawks often nest in trees closest to snakes.  Snakes are attracted to food and water sources as well.   Young snakes have a wet bite, which is dangerous. At least, they caught the snake for identification purposes. Life happens everywhere. Just be observant.

I am aware of a way side where a young man had pulled over to take a nap. He was killed when a python got into his vehicle and killed him while he was napping.  They only identified the snake by the scales it left behind. I have watched a python cross a Walmart parking lot during the day, It was between a drainage pond and a canal.

Michael You are truly an idiot

Really?  Do you look down at the floor every time you enter a place of business to search for snakes?  I'm just glad she's ok.  There is nothing wrong with sandals and you've made a lot of assumptions here that have nothing to do with anything.  Dirty feet?

Man you are all over the place with your comment. Needless rant over shoes when this woman could have died. I am going to guess you have the right to blame her for being bit. Then you speculate about her hygiene. Do us all a favor and just don't respond. You are the kind of person who fosters hate.

Maybe if she had shoes??!

Permalink Submitted by Angel on Mon, 02/01/2021 - 5:39pm
Even if she had shoes on covering her feet or boots,unless they're made for snakes,a snakes fangs can puncture anything that isn't made for snake handling to prevent puntures. Regardless she would have got bitten. And if the restaurant was sweeping under tables after customers they would found the snake and prevented a life threatening situation. Baby copperheads can not control their venom they release like adults. Baby venomous snakes release more venom then adults causing more dangerous situation if not treated asap. Wearing shoes isn't going to Matter with them!

Blaming the person who was

First off there should not be any reptiles inb any establishment. Michael must be the manager who don't care about his customers and their injuries. Michael get a life and start feeling what that customer feels.

Lighten up people. Why must there always be blame placed?  Wild critters can get into just about anyplace.  Just be aware of your surroundings no matter where you are.

Permalink Submitted by Babysnakedoctor on Wed, 09/02/2020 - 11:14am
Way to go jim very good answer and advice no need to speak with fork tongue

I grew up in the south, this is unfortunately the type of situation known well to those who live in the beautifull warm climate, as those who live in the cold climat deal with snow, ice and frost bite. it is unfortunate that such a thing would happen to anyone. it is not the rstaurants fault a it is not the fault of the individual who got bit. I hope that the restaurant checked to be sure there is not a nest somewhere in the store or close to, that is their only real responsibilty now that they aer aware of the possible situation at hand. sure they do feel bad and will do what they can to be sure it does not happen again, but reality is there really is nothing they can truely do to guarentee it will never happen again.  God Bless the lady who got bit, my prayers go out to you and your family and i hope you get better real soon with no lasting implication from the snake bite. they are such Nasty creature!, this is the onlt reason glad to live in a cold climate now, but the thuth be known i would move back to the hot in a heart beat and take my chances...Cj

I'm betting the snake was transported into the restaurant by someone, possibly as a sick joke - it didn't get there by itself. Not the restaurant's fault, nor the victim's fault. No one should have to wear boots into a restaurant just in case there's a snake in there. And the least at fault, the snake.  Unfortunate all around. I hope the woman is feeling better by now - that's a very painful bite..

That poor woma, glad she's ok since those baby copperheads release all their venom in one bite!  As for her wearing sandals, so?  As for the restaurant having a baby snake inside the door, things happen sometimes that are really no one's fault.  Maybe all restaurants should hire a snake hunter to check out the establishment before anyone enters!  Stores, too!  Yes that's sarcasm.

She could have gone in to eat a salad! Why would you even write something that's so oblivious to this topic? Oh you just wanted to chime in with something silly!!!!!!!!

Apparently you’re not from the south, as you have no idea about snakes. I’m sure no one put it there. Snakes crawl in places all of the time, and often get into homes, and other buildings in the south, on a daily basis. So, to your, I won’t call it stupid, but uneducated comment, yes, snakes do just get into buildings on their on.

Wow, rattle snake bits are bad. I'm glad that the woman is going to be okay. When rattle snakes are young their bits are really bad. I had to kill a baby in my basement a couple of years ago. It was dark in the basement and I thought I was reaching down to pick up some trash. It was all coiled up ready to strike when I killed with my shovel. It's amazing how fast one can move when they need to.