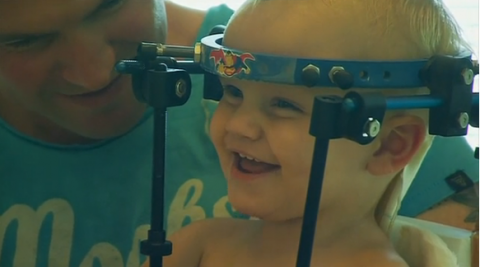 A baby boy in Australia has survived a horrifying injury thanks to the miracle work of doctors, but could the injury have been prevented by the use of a rear-facing car seat?  NBC News reports:

The 16-month-old boy, Jaxon Taylor, was riding in a car with his mother and 9-year-old sister last month when they collided head-on with another car at about 70 mph in northern New South Wales. The force of the impact tore apart Jaxon's upper vertebrae, leaving his head internally severed. "The second I pulled him out, I knew that he — I knew that his neck was broken," Jaxon Taylor's mother, Rylea Taylor, told 7 News Melbourne. Jaxon was airlifted to a hospital in Brisbane, and ended up in the care of spinal surgeon Geoff Askin. "A lot of children wouldn't survive that injury in the first place," Askin said. "And if they did and they were resuscitated they may never move or breathe again."

Dr. Geoff Askin is known as "the Godfather of spinal surgery," and he and his team of surgeons used a piece of one of Jaxon's ribs to graft the severed vertebrae together during a 6-hour surgery, and the toddler is already on the road to recovery.  It's important to note that internal decapitation is much more likely to occur when children are in forward-facing car seats. As we've previously reported on ADC:

A 2007 study in the journal Injury Prevention showed that children under age 2 are 75 percent less likely to die or be severely injured in a crash if they are riding rear-facing. A New York Times piece covering the updated AAP recommendation explains how much more severe an injury is to a baby in a front-facing seat:

“A baby’s head is relatively large in proportion to the rest of his body, and the bones of his neck are structurally immature,” said the statement’s lead author, Dr. Dennis R. Durbin, scientific co-director of the Center for Injury Research and Prevention at the Children’s Hospital of Philadelphia. “If he’s rear-facing, his entire body is better supported by the shell of the car seat. When he’s forward-facing, his shoulders and trunk may be well restrained, but in a violent crash, his head and neck can fly forward.”

To put this in more horrifying terms, this means that forward-facing in a car seat can mean internal decapitation for a baby.

It's not clear whether little Jaxson was in a rear- or forward-facing seat at the time of the crash, but extended rear-facing car seat usage for children in Australia is much less common than in the United States. There is currently a push in Austraila, "Rear-Facing Down Under," to make it law that babies under 12 months must be in a rear-facing car seat. In the U.S., the AAP recommends that children rear-face until age 2, but only New Jersey has a law to this effect.  Regardless of how to the injury occurred, it's wonderful to see little Jaxon on his feet and laughing with his family.

A toddler has undergone delicate surgery to reattach his head to his neck following a serious car accident.Specialist staff pulled off what was thought to be impossible. The boy will now be able to lead a completely normal life after his marathon surgery.7 News reporter Katrina Blowers has the details.Latest from 7 News: http://yhoo.it/1HYefMw7 News video: http://yhoo.it/1V97pbWLatest news on Twitter: twitter.com/7NewsMelbourne

Permalink Submitted by I am not saying on Wed, 10/21/2015 - 9:23pm
When i say the video i was and got sad, i didn't think that he was going to live but when they said that they helped the child and fixed his neck i knew that the lord was with then when that happened and didn't want them to loose their babay so he helped them out and mad sure that the child with live a full live and if he said that it was time for the child to go up their with him all he had to do was say "COME WITH ME". But he wanted the child to live instead of dieing, and if you don't believe in God then you can believe in what ever you want to but that's what i believe.

How is Jaxon Taylor now, one year after his trauma?

Permalink Submitted by al miller on Sun, 10/09/2016 - 3:17pm
Most, if not all, so- called "accidents", which are really collisions, could be prevent by all vehicles being equipped with automatic braking. The technology is there but would cause a great loss of income to many that benefit from the results of collisions. There would be the loss of car repair money, medical care money, funeral expense money, etc. Will the people allow the laws of Capitalism to overthrow the law of humanism forever?