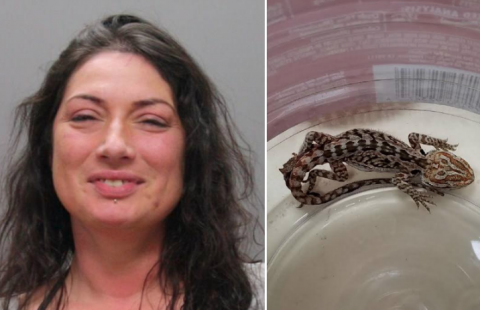 In a Facebook post, the Taunton, Mass. Police Department describes how they came to have, among other beings, a bearded dragon in their custody.

On May 15 at 1:23 p.m., Taunton PD was dispatched to Staple Street, where a crashed car was disabled in a yard after smashing several mail boxes. Witnesses told officers that while the female driver, 39-year-old Amy Rebello-McCarthy, was standing next to the vehicle, while her male passenger hopped into the driver’s side to attempt to drive the vehicle back to the road, despite the fact that the vehicle's airbags had deployed, both bumpers had been torn off, and all four tires were flattened.

When approaced, Rebello-McCarthy, of Newton, "began laughing and didn’t feel the crash was that serious. She was slurring her words and at times drooling." Rebello-McCarthy also requested that offiers call a tow truck so that she and her companion could be on their way.

Presumably the officers declined this polite request, and after the discovery of a semi-automatic weapon in the waistband of her companion's pants, but before being taken into custody, Rebello-McCarthy informed officers that she was in possession of a bearded dragon lizard, which she was housing her bra.

Per Taunton PD, "The Bearded Dragon Lizard was transferred to the Taunton Police Department and turned over to the Animal Control Officer. It faces no charges at this time."

The driver, on the other hand, was charged with operating a motor vehicle under the influence, driving to endanger, and marked lane violation. Her BAC was just under twice the legal limit.

A new menaing for the phrase "lizard breath"?

just so glad the lizard wasn't charged or harmed.....and that it's on his way to a new and safer home. With a semi-automatic-carrying-companion in it's life the animal control may have saved it from being turned into a purse or pair of shoes.

What gave the officr the right to search the passneger and find the weapon in the first plaee?

What gave the officr the right to search the passneger and find the weapon in the first plaee?

Do you ever wonder why women smile for their mug shots? Because they know that the cops, the courts, the judges, district attorneys, prosecutors, and juries are all easy on women criminals.

it was a cold blooded reptile..she was keeping it warm..

so happy he survived.