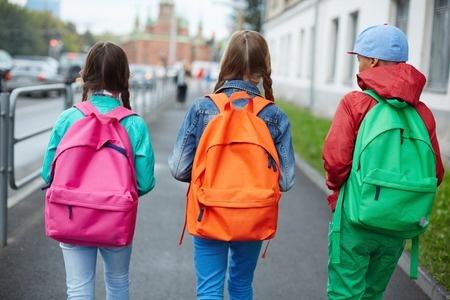 Being struck by a car is the third leading cause of death for children 5- to 9-years-old. There are plenty of reasons for this -- kids are easily distracted, have terrible attention spans, and their impulsivity often manifests in them running away from their parents, no matter how careful mom and dad may be. Kids are also, well, small, making them more likely to sustain fatal injuries when they are stuck. And, according to Psychological Science, they literally can't see cars coming. None of these factors are going to change anytime soon, barring some sort of bizarre Benjamin Button plague, so I'm wondering: why aren't kids wearing relective vests?

For a country over-obsessed with stranger danger, we're strangely unafraid of the effects of poor health caused by lack of exercise. Child obesity has skyrocketed in America at the same time that rates of kids walking to school have plummeted, and according to the website Safer Routes Info, in 2009 approximately 23,000 children ages 5-15 were injured and more than 250 were killed while walking or bicycling in America, while only 13 percent of children 5 to 14 years of age were walking or biking to school.

Parents cite traffic danger, behind distance, as the second-biggest reason they won't let their kids walk to school. Given kids' underdeveloped perception skills and the fact that, at least the in the winter, many of them are leaving for school in the dark and coming home in the dark, it makes sense to want to just drive them. But the risks of stranger abduction are inflated by sensational media, and the risks of dying of heart disease as an adult are far higher than getting hit by a car as a child, so kids should be encouraged to actively commute to school. There's no reason, however, that we can't make that commute safer.

We can't make kids' perception skills develop any faster, and we can't make the sun come up any sooner, but we can make them more visible. It's true that getting kids out the door for school is a big enough pain without adding another accessory to the mix, but reflective clothing should be a standard part of any child who commutes to school on foot or by bike. It's a simple, effective way to make sure your child will be seen by people driving cars.