Albuquerque is the most populous city in New Mexico. The high-altitude city serves as the county seat of Bernalillo County, and it is situated in the central part of the state, straddling the Rio Grande. The city population was 557,169 as of 2014, and ranks as the 32nd-largest city in the U.S. Albuquerque is home to the University of New Mexico (UNM), Kirtland Air Force Base, Sandia National Laboratories, Lovelace Respiratory Research Institute, and Petroglyph National Monument. The Sandia Mountains run along the eastern side of Albuquerque, and the Rio Grande flows through the city. Albuquerque is also the home of the International Balloon Fiesta, a large gathering of balloons from around the world.

The climate of Albuquerque and Santa Fe affects driving and traveling

Albuquerque has a cold desert climate. Albuquerque is in the northern tip of the Chihuahuan Desert, near the edge of the Colorado Plateau.The average annual precipitation is less than half of evaporation, and no month averages below freezing. Albuquerque's climate is usually sunny and dry, with an average of 3,415 sunshine hours per year. Brilliant sunshine defines the region, averaging 278 days a year; periods of variably mid and high-level cloudiness temper the sun at other times. Extended cloudiness is rare. The city has four distinct seasons, but the heat and cold are mild compared to the extremes that occur more commonly in other parts of the country.

Santa Fe experiences a semi-arid climate bordering on a Subtropical highland climate with chilly winters and hot summers. The 24-hour average temperature in the city ranges from 30.3 °F in December to 70.1 °F in July. The city usually receives 6 to 8 snowfalls a year between November and April. The heaviest rainfall occurs in July and August, with the arrival of the North American Monsoon.

Top industries in Albuquerque include aerospace and defense, energy technology including solar energy, and semicondcutor and computer chip manufacturing. Major employers in the Albuquerque area include Kirtland Air Force Base, Sandia National Laboratory and Intel Corp.

Santa Fe's economy has been based largely on tourism and state government. As capitol of New Mexico, the government is the largest employer in the area. Santa Fe receives an average of 1.6 million visitors annually. Tourism boosts the city's retail industry, which brings in more than $1 billion annually. Because of the city's proximity to Los Alamos National Laboratory, 45 miles away, scientific research has also become a factor.

Two interstate highways pass through: I-40 goes east-west and I-25 goes north-south. Where they meet is a large intersection called "The Big I". Albuquerque's Central Ave. is part of old Route 66. Central Avenue is a principal east-west artery, running roughly parallel to I-40 and through Downtown just west of I-25 and past the University of New Mexico just east of I-25.

Albuquerque is easily accessed through Albuquerque International Sunport, a public airport 3 miles southeast of downtown Albuquerque. It is the largest commercial airport in the state, handling 4,871,901 passengers in 2014. Albuquerque offers bus service through ABQ Ride.

Find out about recent accidents in Albuquerque and Santa Fe, including:

After a serious accident, you may need information about the major regional hospitals

After a serious or fatal crash, grief support services can help

When someone has been injured or killed in an accident, grief support services and counselors help those involved begin dealing with stress and loss. It can be comforting to talk with others going through a similar situation, and the road to recovering from the loss may go more smoothly. Learn more here about Albuquerque grief support and Santa Fe grief support services.

After someone has been injured or killed in a motor-vehicle crash in Albuquerque or Santa Fe, many decisions need to be made immediately and questions need to be answered. For example, how much of the medical costs will be covered by the insurance policy? How does PIP insurance help with medical bills immediately? What if the at-fault driver has no insurance?

After a serious crash, it is crucial to get help from an experienced New Mexico personal injury attorney who understands the local regulations and legal standards, who knows how insurance policies work when an injured person is out-of-network, and who can handle all aspects of an insurance claim so the injured person can focus on recovery. If someone is killed in a collision, an Albuquerque - Santa Fe wrongful death lawyer will launch a claim that will begin the process of financial recovery for the family members left behind. Learn more here about what a New Mexico personal injury attorney can do to help.

New Mexico has the highest alcohol-related death rate in the U.S., according to the New Mexico Department of Health. In fact, one in five deaths of working-age adults is attributable to alcohol. Learn more here...

Myths About Driving Near Trucks

Go here to learn how commercial trucks operate, to helping you keep yourself and your passengers safe while driving near big rigs.

Get the motorcycle safety checklist here including information on proper attire, pre-ride inspection, and routine maintenance.

How to Maximize Your Case Value

Learn about ways to maximize your case value including calculating damages, proving pain and suffering, determining a settlement amount, and tips to incease case value.

How to File Police Report After Car Accident in Albuquerque

The driver at fault is responsible for paying for the damages. Learn here how fault is determined in New Mexico, and see examples of fault in real cases.

Driver hurt after their car hits embankment and rolls off of Camino de la Placita in Taos, New Mexico

One pedestrian sent to hospital after being hit by driver that fled the scene on Central Avenue in Albuquerque, New Mexico

One discovered dead in vehicle that was underwater near Avenida Cesar Chavez and I-25 in Albuquerque, New Mexico

Ona Savage, 83, killed and 14-year-old passenger hurt in when their stopped car is hit by other vehicle on Interstate 40 in Albuquerque, New Mexico

One person injured in crash at Grand Canyon and Pajarito Road in White Rock, New Mexico

One on motorcycle critically injured after colliding with vehicle on Monroe Street and Candelaria Road in Albuquerque, New Mexico

One confirmed dead in collision between motorcycle and other vehicle at East Murray Drive and Bloomfield Highway in Farmington, New Mexico

One on moped dies after collision with car at Garcia Street and Central Avenue in Albuquerque, New Mexico

END_OF_DOCUMENT_TOKEN_TO_BE_REPLACED 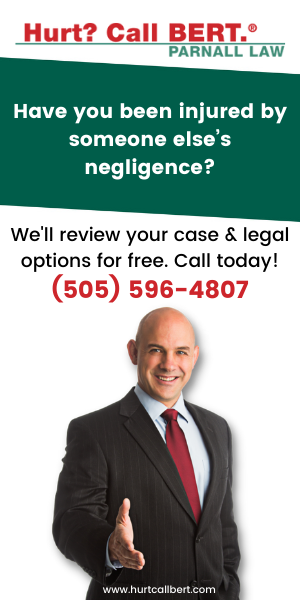