Everett-Bellingham WA - Accident News and Resources including car, bicycle, motorcycle and truck accidents and much more.

Whatcom County, Washington, on the border with Canada, is an established college town with a growing population

Whatcom County has a population of approximately 200,000. The county seat and largest city is Bellingham. The county name ultimately derives from the Lummi word Xwotʼqom, meaning "noisy water."

As of the 2010 census, its population was 78,506. Its county seat is Coupeville, while its largest city is Oak Harbor. Its name reflects the fact that it is composed entirely of islands. It contains two large islands, Whidbey and Camano, and seven smaller islands - Baby, Ben Ure, Deception, Kalamut, Minor, Smith, and Strawberry.

San Juan County is a county located in the Salish Sea in the far northwestern corner of Washington State. As of the 2010 census, its population was 15,769. Of the hundreds of islands in the county,  only 60 islands are inhabited.

Skagit County - Situated between near the majestic Cascade Mountains, the fertile Skagit Valley, and the powerful Skagit River

Skagit County, with a population of 116,901, is situated in the gorgeous Skagit Valley. The county seat and largest city is Mount Vernon. The majestic Cascade Mountains stand to the east, overlooking a fertile valley boasting a variety of agricultural crops. Running through the valley is the powerful Skagit River flowing westward toward the beautiful San Juan Islands.

Snohomish County, with a population of 772,501, is the third-most populous county in Washington. The county seat and largest city is Everett. The county is located between the sparkling blue waters of Puget Sound and the rugged, snow-capped peaks of the Cascade Mountains. Snohomish County begins 12 miles north of Seattle, a little under 100 miles south of Vancouver, and a short ferry ride away from the San Juan Islands and the Olympic Peninsula. Snohomish County is home to over 20,000 businesses, ranging from small family farms specializing in organic foods, to the world’s largest advanced manufacturing facility producing state-of art aerospace equipment.

The region's climate can contribute to accidents throughout the Northwest Interior

The climate is generally mild and typical of the Puget Sound region. The year-long average daily high and low temperatures are 59 and 44.1 °F. The western region of the Northwest Interior has a marine oceanic climate that is strongly influenced by the Cascade Range and Olympic Mountains, and gets an average of 42 inches of rain per year.

In Accident Data Center, find recent accidents at the links below:

When someone is injured in an accident in the region, it is important to gather information about what happens next.

Being injured in a serious accident is always a shocking and scary experience, and dealing with the aftermath is exhausting and stressful. Accident victims are forced to deal with hospitalization, medical treatments, missed work, and lost income, often while trying to manage pain and disability from their injuries. And then the insurance adjusters start circling. Find out more about accidents and what issues an injured person needs to be aware of by going to this link.

What to do after a serious injury accident in Whatcom, Island, San Juan, Skagit, or Snohomish County

Top 7 reasons to hire an experienced personal injury attorney
What every family needs to know about a wrongful death case
What is a tort?
How Bellingham car accident victims answer "How are you?" could impact their claim
Bellingham accident victims can expect insurers to dispute future expenses

Bellingham car accident victims take heed: what you say can and will be used against you in your accident claim

If you are the victim. It nearly never occurs that you will hear the adjuster handling your case admit that their insured customer is the one liable for the collision.

Please remember that even if an adjuster sounds sympathetic and friendly, they are not on your side. You must pay close attention to their questions, and assume that they are looking for anything that can reduce your claim.

Are teenagers addicted to their phones? Half of them say yes they are.

As a personal injury attorney here in Bellingham, I feel like this problem has one of the greatest negative impacts on driving habits. If a teen can't get off the phone in general, driving is too often just another place to be on social media or the web.

Here are some tips for that first contact with the insurance adjuster to help you advocate for yourself or a loved one and set the stage for financial recovery instead of further anxiety and financial stress.

How Bellingham car accident victims answer "How are you?" could impact their claim

One of the tricks insurance adjusters will try is to get a recording of you talking about your accident and claim. Of course they will try to get in writing anything about you that they can, including your complete medical records.

Back to school safety tips

It's very important for motorists to slow down and drive with their full attention. Below are some things for drivers to think about when school is in session.

Most of those accidents occurred during the hours before and after school, and peaked in September, perhaps as everyone gets used to the idea of sharing the roads again.

One trick insurance adjusters use against Bellingham car accident victims

When you’re involved in an accident, it’s an insurance adjuster who comes to evaluate your claim. Most likely they will come across as very friendly and professional, but it’s important to remember whose side they are on.

If drivers follow the rules and drive under the legal speed limit, they should theoretically have enough time to stop if a child or pet runs into the street. But there is no substitute for caution!

Why are semi trucks such a danger to Bellingham and Whatcom County cars?

As you can imagine, if a truck driver or company does not abide by these regulations, the cargo they barrel down the road with could make for incredibly unsafe circumstances for the truck’s drivers, passengers, and innocent drivers sharing the road. If a truck driver does not follow these rules, fines and other serious penalties can be applied.

One person dies when their car is struck by hit-and-run driver, bursts into flames on Meridian Street in Bellingham, Washington

Michael A. Warnke-Sedano, 26, killed and two others hurt after hit-and-run driver causes three-vehicle collision on Highway 20 near Sedro-Woolley, Washington

Four people hospitalized after three-car crash in front of The Rhody Cafe at the intersection of Chuckanut Drive and Bow Hill Road in Bow, Washington

66-year-old male passenger airlifted to hospital when vehicle gets struck by oncoming car while turning on Highway 20 near Helmick Road near Sedro-Woolley, Washington

One person killed in collision involving commercial truck on Interstate 5 near Arlington, Washington

Driver dies after hitting mattress that fell off truck on I-5, then colliding with semi-truck in Mountlake Terrace, Washington

Hit-and-run crash on Samish Way near the Elks Club in Bellingham, Washington

END_OF_DOCUMENT_TOKEN_TO_BE_REPLACED 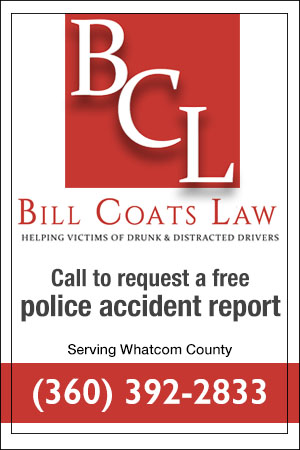